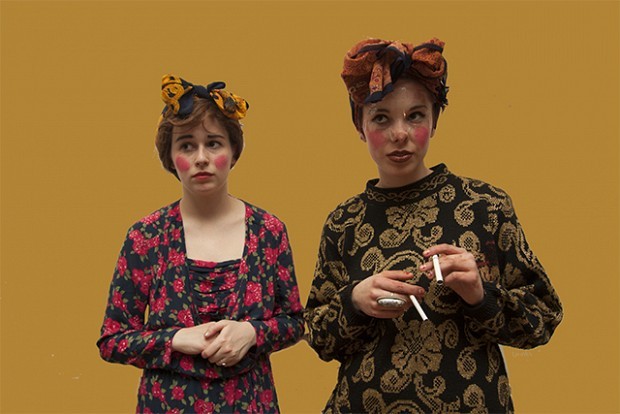 Through costume making, object making and performance I make videos fueled by femininity, pop culture and the camp aesthetic.

My practice is equally divided between making and doing. I create objects and costumes with the intention of using them in video. Sometimes the costume or object will dictate the content of the video and sometimes the content I have planned requires that I make certain props.

I use my close friends (all of whose work I admire and am influenced by) as actors in my work and rely on their improvisation. I am inspired by filmmakers such as John Waters, George Kuchar, Jack Smith and The Mighty Boosh who used their peers in all of their films. All of these artists wrote, directed, sometimes stared their films and made their own props and costumes. Performing in my own work is a crucial aspect to my process. I am inspired by the sense of ownership that comes with creating every aspect of a film. I am also inspired by the low-budget aesthetic of their work and I continually try to find a balance between forcing a poor-image quality aesthetic and letting it come naturally by resisting more modern ways of making video, for example filming with a VHS camera.

Narrative structure and comedy are crucial aspects to my work. Comedy paired with camp imagery follows the tradition of the artists I mentioned as well as being aesthetically pleasing and entertaining for the viewer-which can then be used as a link to a more serious discussion. I am examining feminist camp and pop culture by consciously using the female body and deconstructing imagery that is often misogynistic and eye catching. I aim to re-claim these images and draw attention to them rather than re-enforce them.

Once the video is complete the final product is the video its self but also the objects and costumes after they have been worn and used. The documentation that happens during the filming/editing such as cellphone pictures or screen shots is an important final product. I do not see my work as one product but an event that produces many final products. This is important because then the work exists in more than one form, as an event rather than a single piece.