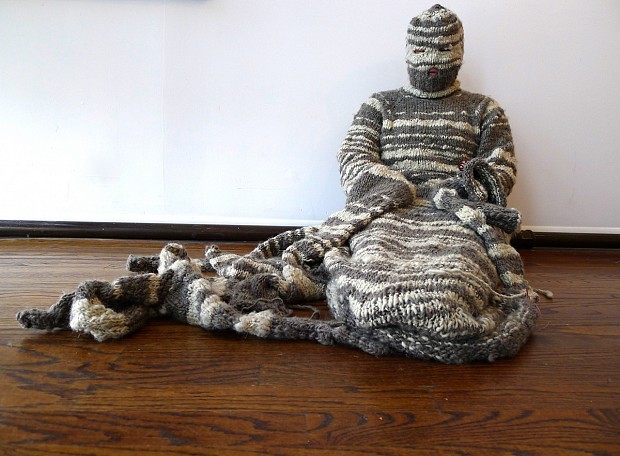 It comes and passes as it pleases without any warnings, and immediately we are swept away not knowing where we will land. Though it seems like it would never come to an end, every little tragic story has its own endings. Yet, what follows afterwards is much harder to bear in the heart than the incident itself.

The agitations, woes, anger and desolation are not only the skin of the work, but becomes the second skin of ourselves; the burden that weighs us down, both mentally and physically, and troubling us to function in a normal sense. My work is about a person’s transition through a traumatic experience, and what is left of them afterwards.

Through using my own hand-spun yarn, I have built up a heavy weight garment that eventually becomes a fully covered hideout and a second skin, unable to identify who lies underneath. The disconnection is further activated through positioning myself into the crowd, where discomforting and awkward atmosphere created by the existence of my own forces them to push me away, avoid and ignore. It is always there and it never goes, but both side of us will never fully reach each other and understand.