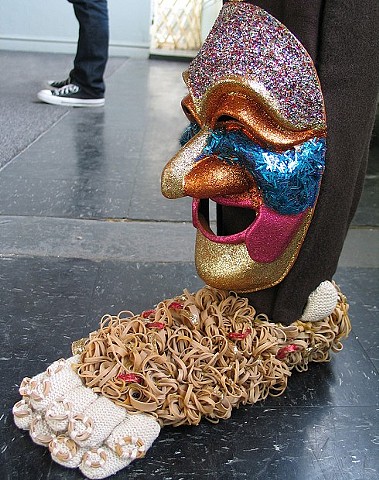 I see connections between fiber and material studies, stage set design, visual communication design, video, and geography. Fields of study cannot be completely separated, but are connected with one another.

In Korea, I was a geography major &#8722; the study of physical spaces. When I studied various geographical regions, I learned about the different ways people live. When I switched from geography to visual communications, I started to look at cyber space through motion graphics. Even if people physically live in the real world, they inhabit fictional or cyber worlds such as the Internet, TV programs, and film. I am expanding all the possibilities to express my thoughts with various media such as video and everyday objects. I have recently experimented with architectural space with objects such as a guitar and a fan. I deconstruct these objects and add similar-shaped structures to the deconstructed objects. Through this process, I create expanded and transformed objects, which show architectural space.

The themes of my art also come from my daily experiences. I am especially interested in cultural differences and cultural identities as an international student studying abroad. For example, I put Korean snack packages inside Coca-Cola bottles, which are symbols of America. Korean typography shows through the transparent bottles that are labeled in English. I also attach nametags that say "visitor" to every bottle. Installing these bottles beside a window, my environment is also shown. The entire piece shows my self-portrait. I also use these Coca-Cola bottles to cook in a separate video piece. Cooking Coca-Cola with Korean snack packages makes the audience feel the piece is not only funny but also awkward and weird. Being confused, I show who I am in both Korean and American cultures.