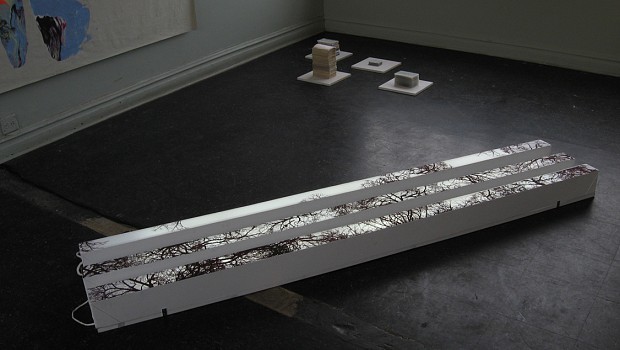 The Process of Filtering

In my work as an artist, I am interested in a wide variety of subjects ranging from personal explorations of memory and relationships to politically based work. Each work is conceptually separate, at times adding to a collective body of work and other times standing alone. Though not always connected, through methods and processes of working are the constant variable in my work. The following list best describes the importance of the process:

- conceptual exploration based on a intuitive approach - appropriate material selection - through the process the work begins to take form - I pull the concept through various methods of research - editing, while focusing on the most essential aspect of the piece

As the author/researcher of politically based works, I take on the role of a social critic. The projects begin with the observation of a specific social or political matter. My effort is to guide the viewer to s particular social or political recognition. For example, I photograph Chicago public parks which use military machinery as a sculpture erected to memorialize the death of soldiers. The photographs are meant to provoke the viewer to the awareness of such contradictory phenomenon. Though there is a relationship between war tactics and sports a park is still a place of leisure, family picnicking and relaxation. This is an ongoing projects, which will eventually be transformed into an installation of two adjacent rooms, one with large scale, color skewed photographs and the other occupied by a massive amount of toy solider.

Since I rely on the process as a vehicle for my artistic vision and voice, I have used traditional art materials as well as, others such as such as flour, rust, earth. For example, Dom, a project that addressed nostalgia and the ephemeral aspects of memory, I used an old uninhabited space adjacent to my current apartment. The aged, deteriorated walls of the piece engulf the viewer upon entering. The focus of the piece is a bright window, a light box, with an image of me as a child in the natural environment of Poland. Most importantly, the floor of the space symbolizes how memory transcends. It is covered with a layer of flour. Upon entering the space and stepping into the flour the viewer disrupts and ultimately alters the installation. Furthermore, as one exits the space, he/she obtains a part of the piece by tracking the flour outside the piece. This performative gesture relates to the notion of how, upon entering a person's life we alter their experience and ours. Though that might not be as relevant in the United States, flour has traditionally been a very important source of nutrition associated with various customs.

The installation titled Dendritic was created initially as a response to neurological trauma of the brain experienced by two people in my life. I transferred their MRI (magnetic resonance imaging) and CT (computed tomography) of the brain through various processes, finally arriving at the cloth, screen printed light boxes. Referencing the sterility of the medical practice, I arranged a grid of images connected through an electrical wire. The electrical current serves as metaphor for the central nervous system of the human body. The images function in a systematic way, therefore any disruptions in the wiring will result in a partial blackout of some of the boxes.

I constantly filter my research and working methods in an effort to fine-tune my artistic endeavors. Overall, my work involves investigating new concepts while continuing to explore ongoing projects dealing with the body, memory, social and political issues.